It’s hard to find kitchenware that’s as well-loved as a good cast iron. Professional chefs and home cooks alike swear by their versatility in the kitchen, as well as their longevity.

“As long as you take care of them, they’ll last you a lifetime” says Drew Turnipseed, culinary director for Grilla Grills in Holland, Michigan.

But every chef’s approach to cast iron is a little different.

“Cast iron is kind of like barbecue—everyone has their take,” says Turnipseed.

How to Pick the Right Cast Iron Pan

When shopping for a cast iron pan, Turnipseed says to look for one uniform surface without screws or creases. “You want one clean cooking surface,” he says.

You also want to pay attention to the weight, says Jimmy Ly, chef at Madame Vo in New York City. “You want a heavy-bottomed pan, that will allow for even heat distribution and make for great searing and cooking.” If you have a little more money to spend, he recommends going for something “lighter and sleeker, with the efficiencies of cast iron.”

Remy Forgues, chef-instructor at the Institute of Culinary Education in New York City agrees. “Look for a pan that is easy for you to handle, especially considering you’ll be lifting the weight of the pan and whatever foods you’re cooking in it.”

How to Season Your Cast Iron

Even if your cast iron says it’s pre-seasoned, Turnipseed recommends seasoning it again once you get it home. Apply a neutral oil like vegetable or canola generously to the inside of the pan and use a kitchen rag to wipe the oil throughout. Then remove any excess. Turnipseed cautions against using paper towels, which can rip apart and make a mess.

Then, place it upside down in a 350° oven for 60–90 minutes. Turnipseed recommends doing this regularly—up to once a month if you use your cast iron frequently—to keep your pan in good shape.

How to Clean and Store Your Cast Iron Pan

After cooking with your pan, wipe it out while it’s still hot. You can use water to help dislodge any stuck bits, but do not use soap.

“The most important thing is to make sure your pan is fully dry and clean before putting it away, otherwise it will rust,” says Ly. Turnipseed recommends putting your freshly washed cast iron on the stovetop on medium-high heat to thoroughly dry it out. “It may smoke a bit, but that’s fine. You’re getting all the water out, so it doesn’t rust.”

If the skillet doesn’t feel completely clean yet, Turnipseed recommends pouring a generous amount of coarse kosher salt into your pan and using a kitchen rag to scrub out any stubborn debris. Discard the kosher salt once you’re done.

Then, wipe it out and store it with your other pots and pans. Or, if you’re short on space or just love the look of your cast iron, feel free to get creative. Ly keeps his Le Creuset skillet on the stove. Forgues stores his in the oven.

If you’re new to the cast iron life, chefs recommend starting with a pan between 9–12 inches, as it’s “large enough to sear off a few pieces of protein or to have enough room to sweat down ingredients like mushrooms.” says Ly. If you’re cooking for a large family, Turnipseed recommends going up to 18 inches.

The Best Pizza Stones and Steels According to Chefs 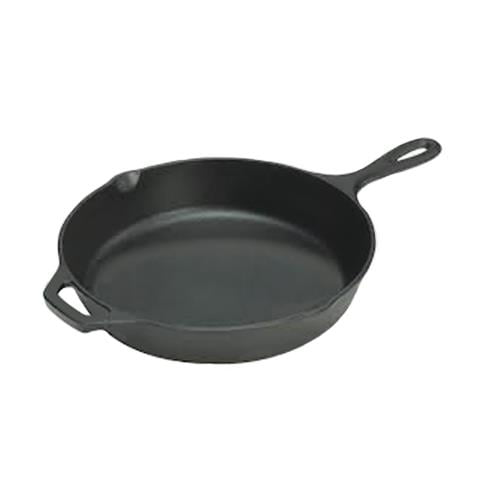 “This is the one I use,” says Turnipseed. “I like a 12-inch pan—it’s not too big or not too small.” He considers Lodge the best brand on the market for the price point. This is Ly’s top pick.

“This pan is beautiful enough to sit on the stovetop and is uber versatile,” he says. “Especially when we live in a time where we have new technology for more efficient cooking, like induction stovetops and lightweight carbon steel, you want to choose a pan that fits multiple needs.” Forgues recommends starting with a slightly smaller pan, more on the 10-inch side.

Though he likes Lodge for budget-friendly options, he recommends Staub as a sleek upgrade. If you prefer to support small artisans in your kitchenware shopping, Turnipseed recommends Smithey’s skillets, which he calls “a cult favorite” among cast iron devotees. Ly and Turnipseed both recommend this one. Ly likes it for eggs, and Turnipseed uses it for desserts or individual baked dishes when entertaining. “Buy a set of six or something and use it as a nice presentation piece if you’re having folks over for dinner,” he says.